We have started taking the poppy displays out of the church, and they will all be taken out by Wednesday.  We will be storing them away and using them in the future.

We want to say thank you to all those who helped prepare the displays – people from the church, Even Swindon Primary School and Rodbourne Community History Group, as well as all those who put the blue plaques in their windows.

To say the last few weeks have gone well is an understatement!  We have been overwhelmed by the response.

More than 1,200 visitors came to see them, 330 attended remembrance services and we raised just under £600 for the “There but not There” charity, whose silhouettes were part of the display and were funded by the Armed Forces Covenant Trust.

BBC Wiltshire’s video of the hanging poppies made in August has been seen by almost 120,000 from the west coast of America right through to New Zealand.

Photos of the displays have been used in both print and online of most major UK newspapers, as well as on the BBC News website.  And, of course, not forgetting the live BBC Points West broadcast from the church on the Friday before Remembrance Sunday.

Thank you Rodbourne.  We did the men who didn’t come home proud. 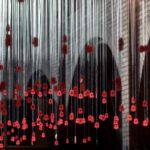 Open for Worship and Individual PrayerSep 25, 2020