The brass War Memorial inside St Augustine’s lists 38 men feom Rodbourne who paid the ultimate price in the Great War. Together we hope to tell the stories of these men and everyone else from Rodbourne who served in any way during the First World War (1914-1918).

In 2018, we’ll mark the centenary of the Armistice with a range of events.

More than 1,500 poppies will appear to float in St Augustine’s Church, with each poppy representing more than 600 people from The United Kingdom who died in WW1.

Most of these poppies have been made by the pupils of Even Swindon School.

The candle lit at the start of the commemorations in 2014 and has been lit every Sunday since will be extinguished on Remembrance Sunday.

There will be other poppy installations around the Parish and Rodbourne Rocks also have a poppy tribute.

We will also be joining the Ribbon of Poppies Tribute with poppies planted in the church garden.

We are also hoping to place Blue plaques around the Parish to commemorate those who died at the address where they lived.

An exhibition of WW1 memorabilia from The men of Rodbourne along with information on those who gave their lives.

Even Swindon School annual remembrance service – open to the community.

Remembrance service on the 100th anniversary of the Armistice including act of remembrance.

Call Gordon on 01793 616558 for more information or contact rodbourneremembers@gmail.com 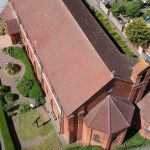